Throughout the year the club holds a number of tournaments, which allows all members to take part in, and in addition those who have made a valuable contribution to the club over the years, are recognised in the A.G.M. Honours.

At the halfway point in the league season and with Chritmas upon us the annual drawn doubles took place. There were plenty of seasonal refreshments available and the addition of some home cooked Japanese dishes kindly provided by Taki Hall ensured that energy levels were maintained throughout the competition. With all players using the same sandpaper hard bats proving to be a great leveller and produced some interesting shots on the night. After an entertaining evening the eventual winners were Rod Bryden and Taki Hall with Phil Smith and Lotte Shaw as runners up.

With the league season coming to a close it was a chance for club members to come together and grab some bragging rights for the rest of the year.

The Blue Ribband event, the Scratch Singles came down to a hard fought contest between Olliver Crossley and Jamie Hall. With both protagonists having the upper hand at different points in the match it was Oliver that eventally won on the night

The `Handicap Singles` event proved entertaining as always and allowed for some close fought matches culminating in the final, where Mike Davies played as though he was 30 years younger, beating Nick Dibben to the title.

The Veterans Singles (over 50`s) was well attended with two pools playing round robin matches to decide the two finalists. In a closely fought final Chris Morgan won on the night just beating Julian Preston 11-9 in the fifth

The club would like to especially thank Roger Johnson for his efforts in organising the tournaments and ensuring that they ran smoothly and on time. 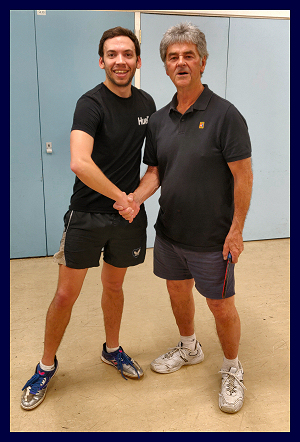 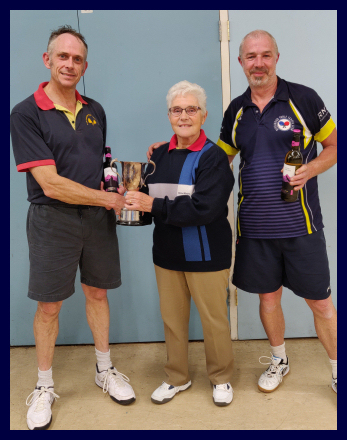 Current holders and previous winners are listed below.